This article is a stub. You can help Earth's Children by expanding it. 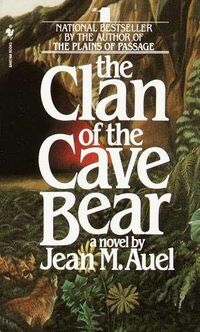 The Clan of the Cave Bear is the first installment in the Earth's Children series. Written by Jean M. Auel, it was first published in 1980 by Crown Publishing, Inc]. In 1985, Warner Brothers, Inc. adapted the novel into a motion picture starring Daryl Hannah.

"Here is a novel of awesome beauty and power. A moving saga about people, relationships and the boundaries of love. Through Jean Auel's magnificent storytelling, we are taken back to the dawn of mankind and swept up in the wonderful world of a very special heroine, Ayla."
―Reverse cover, The Clan of the Cave Bear

The story begins with a 5-year old girl who is suddenly orphaned and left homeless by an earthquake that destroys her family's camp. She wanders aimlessly, naked and unable to feed herself, for several days until, having been attacked and nearly killed by a cave lion and suffering from starvation, exhaustion, and infection of her wounds, she collapses, on the verge of death.

The narrative switches to a group of people—the Clan—who have also been made homeless by the destruction of their cave in the earthquake and are trekking in search of a new home. Alerted by vultures circling above the unconscious child, the medicine woman of the group, Iza, asks permission from Brun, the head of the Clan, to rescue the waif. Iza uses her wide knowledge of healing herbs and procedures in order to nurse the little girl back to life. When she regains consciousness, the girl is shocked to find that her rescuers are physically quite different from people with whom she is familiar: they are Neanderthal whilst she is of the Cro-Magnon people (known to her rescuers as The Others).

Various aspects of the differences between the Clan and The Others are brought out in the story. The Neanderthals' vocal apparatus is incapable of the range of vocalizations that the Cro-Magnons' is and members of the Clan cannot understand, far less pronounce, the girl's name: the closest they get to it (and the name by which she is subsequently known) is "Ayla". However, the Neanderthals are portrayed as having a highly-developed non-verbal language of hand and arm gestures which Ayla at first has difficulty even recognising the existence of. Apart from physical differences there are mental and cultural differences between the Clan and The Others. Mentally, the Neanderthals have highly developed memories including a hereditary Clan memory extending back through countless generations, which can be awakened through rituals performed by the Clan's Mog-ur. Increasing reliance on this ever-accumulating memory has resulted in a strict, almost hide-bound adherence to tradition and decreasing ability to adapt which—the book makes clear—will result in the eventual demise of this branch of humanity.

Apart from Ayla and Iza,Creb, the Mog-ur, is most developed and significant in the book. Born with deformities which would normally have resulted in his being abandoned to die as an infant, he fortuitously was allowed to live and despite—or rather as a result of—his handicap, developed supreme mental and psychic abilities. As a child he was attacked by a Cave Bear, which added to his infirmities but was regarded as being a blessing from the most highly revered and powerful spirit of the Clan people, who regard not just their own group but all people of their kind as an encompassing 'Clan of the Cave Bear'. Creb's abilities are such that he is not only his own group's Mog-ur but "The Mog-ur" of the entire extended clan of Neanderthal peoples in the region. Although Creb's powers—and deformities—are such that he is revered and feared by other members of his clan, he is touched by the practically helpless foundling, who encounters him with none of the awe or apprehension of other clan members, and Ayla and Creb establish a close surrogate father/daughter relationship.

The novel follows Ayla's development from child to young woman, illustrating en route various aspects of the Clan's way of life: hunting and gathering, mating, and social relationships, rituals, taboos, beliefs, and environment. A thread running through the book is the antagonistic relationship between Ayla and Broud, who is son of the leader, Brun, and appointed successor as leader of the clan. This interaction culminates with his raping and impregnating Ayla. The offspring is considered 'deformed', although he is simply a child of "mixed spirits". He is unexpectedly accepted by the Clan, and he is called Durc. The book ends with Broud's succession and his death curse of Ayla, who sets off to find other people of her own kind as Iza, on her deathbed, had urged Ayla to do. She is not allowed to take her son with her, a tragic event that scars Ayla for the rest of the series.

The archaeological and paleontological research for this book was carried out by Auel from her public library and by attending archaeological conventions. Some of the descriptions of the cave and the Neanderthal culture are based on the discoveries at the Shanidar Cave (Iraq). Creb is based on a skeleton found in that cave.

The Clan of the Cave Bear was nominated for numerous literary awards, including an American Booksellers Association nomination for best first novel. It was reprinted 20 times from 1981 to 1985. 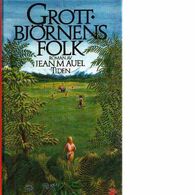 Add a photo to this gallery

Retrieved from "https://earthschildren.fandom.com/wiki/The_Clan_of_the_Cave_Bear?oldid=4354"
Community content is available under CC-BY-SA unless otherwise noted.